I'm often asked about purse frame crimpers, so I thought I'd share my experience of them.
Years ago I heard that there was such a tool so I sent Mr Google to work to find me some. I ended up Paying $70AUD (including currency conversion and postage) for a tool to be sent from the USA.. 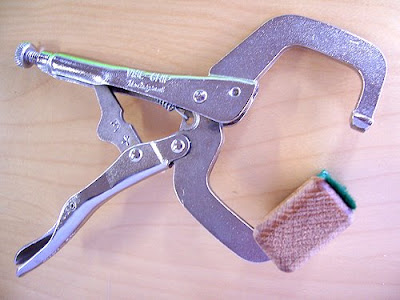 Yup - it's a c-clamp vice grip with a block of wood stuck on it. I could have bought the clamp from Bunnings for $30 and organised the wood bit for myself. 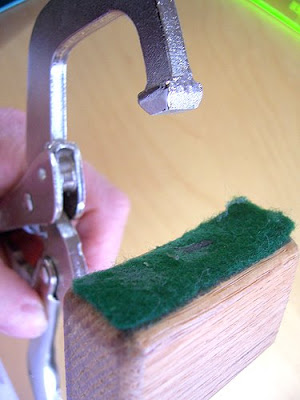 The metal end originally had a piece of felt glued to it, but it fell off ..as did the subsequent five or six pieces I glued to it.
The clamp had a rounded end on it (??!) so I asked a metal-worker friend to grind it flat for me. The felt still fell off. Even hat felt and the strongest glues I could find couldn't stop the felt from breaking away after a few too many squeezes on frames.
And it did this to frames... 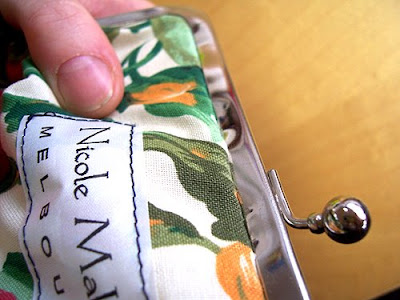 So I ditched the purse frame crimpers and went back to my tried and true super-secret-unless-you-buy-a-kit-from-me method***, which gives me results like this... much better. 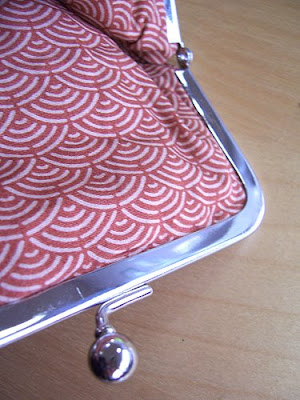 I've stuck with that since. I only use the crimpers occasionally - for really small, fiddly bits - with a chunk of cork coaster protecting the frame from the sharp, ground down (and felt-repellent) metal bit. Even then I find them awkward and annoying.

Anicipating small and fiddly bits on my new frame purse, I started to get nervous.... But today I found this set for $15 in my local hardware shop. I liked the look of the tool in the middle, with its flat smooth ends and compact size. 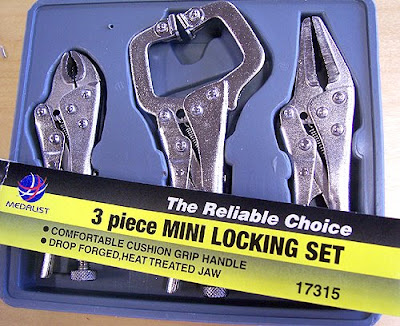 With a bit of cork coaster and cardboard cushioning, I tried each tool on a frame. Surprisingly, the tool on the far right worked the best. I half expected it to damage the outside edge of the frame - as normal pliers often do - but it crimped at just the right angle and the outside of the frame was safely in that open area in the middle of the pincer bits. As you can see, I'm right up on my technical tool-talk. 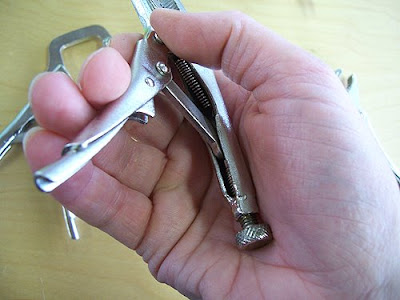 The only down side was the rough adjuster thingamy on the end pressing into my palm. (Hours later, it still feels somewhere between a mild burn and a bruise). 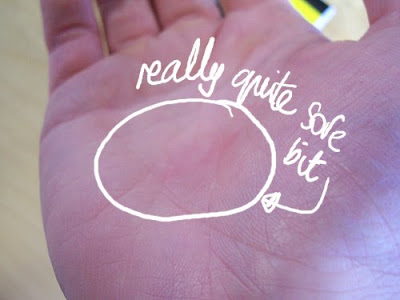 So I devised this high-tech method of hand protection.... 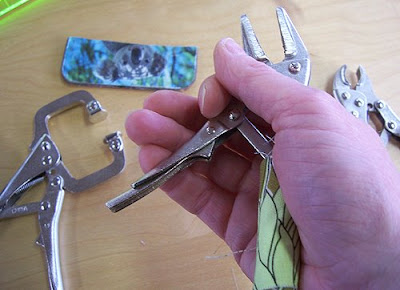 Of course, you could use fabric other than Amy Butler's for the crimper... but the koala cork coasters definitely work the best! ;)
For more details on working with purse frames.... you can buy a kit here! And if you know of a good purse frame crimping tool... pray tell us all where to get it!
...
...
***And please remember, kids.... if you still want me around to make patterns and kits and tutorials, please respect copyright and don't share my secret method!!!
:)
Posted by Nikki at 9:36 PM

Perhaps you could devise some kind of kit for making purse frame crimper covers for hand protection?

Your secret's safe with me! xx

I love a bit of technical tool talk. How exciting to find a tool that works so well.

Nikki, how timely. Earlier this week i made five little purses from your pattern and though - maybe I should get one of the crimper things and was surprised to find them not on your site ! Now I know why!
My five purses are now done but not crimped. I'll go back to the tried and true instructions and get them done.
And once again I have to say - simply the best go-to pattern for a framed purse ever!

I like the tried and true way of doing it - it's the perfect mix of skills and talent!
PS - Love the 'sore bit' photo

I love this post Nikki - especially the "technical tool talk".

Your bags are beautiful! I'd love to take one of your classes, but the airfare from the US is a bit prohibitive.

I don't know if "copyright" and "patent" mean the same thing in Australia as they do in the US, but in the US, someone could get around the copyright problem by explaining the same process in different words. The thing you really need is a patent to prevent others from copying your process, although it may be too late.

Disclaimer - I don't know your secret, but I do believe that people should not copy ideas from artists, even if a certain amount of that is legal.

A great post and something that I've actually been meaning to ask you about for a while. I have to confess, I STILL haven't made the purse from the kit I bought from you ages ago and was just looking at it the other day. Was wondering at the time if it was worth getting some crimpers, but happy to hear that I don't need to :)

This is just a thought but perhaps you could try companies that make tools for hospitals, particularly operating theatres etc. It looks like some of those crimping tools are too short handled which causes a problem. If you could find a talented friend to make a smooth wooden extension for the handle that may help. 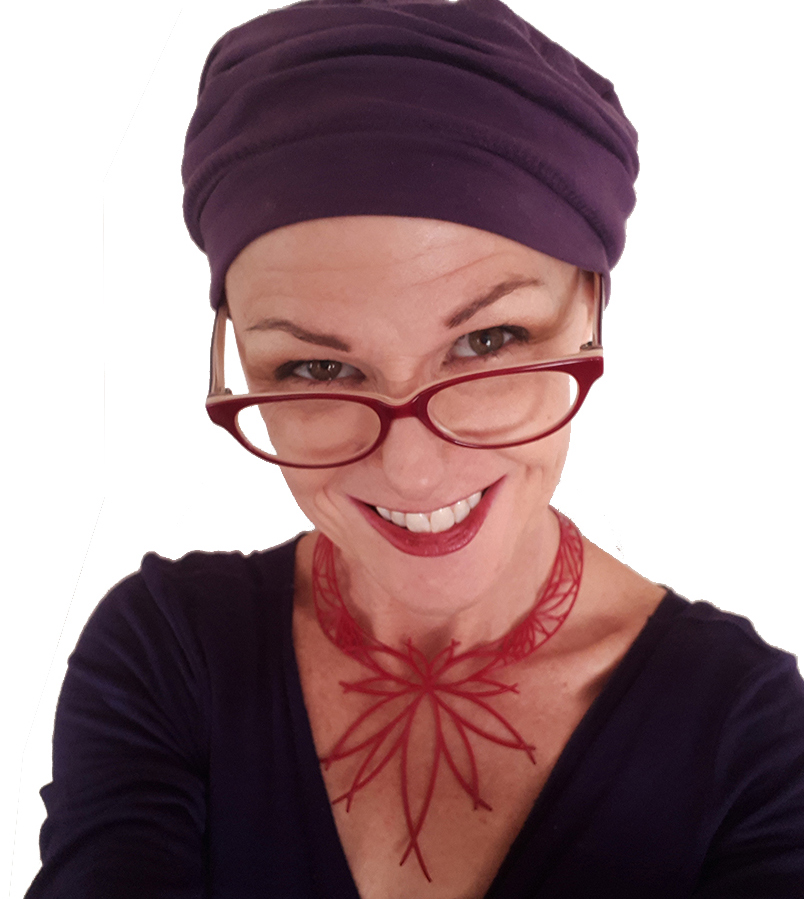 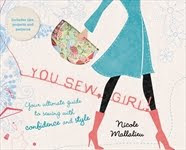 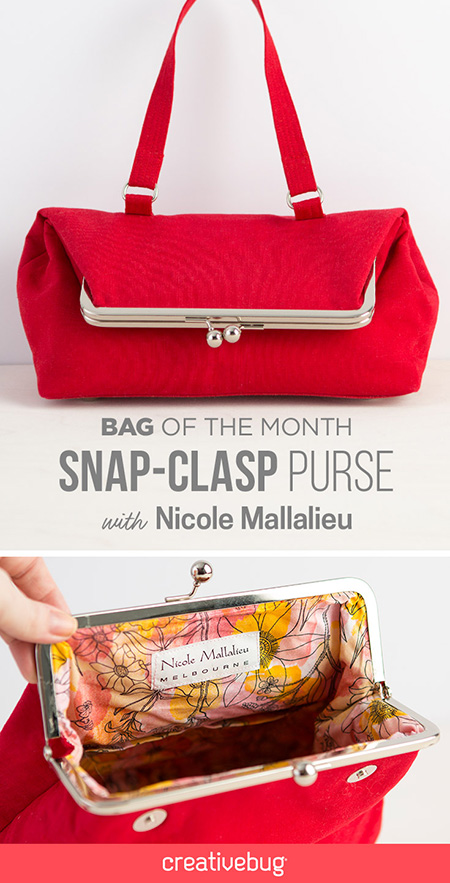 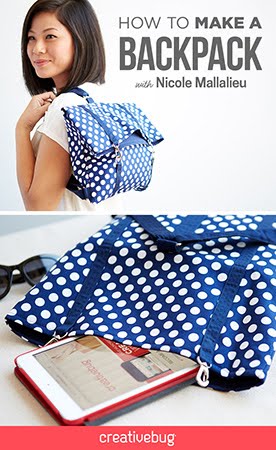 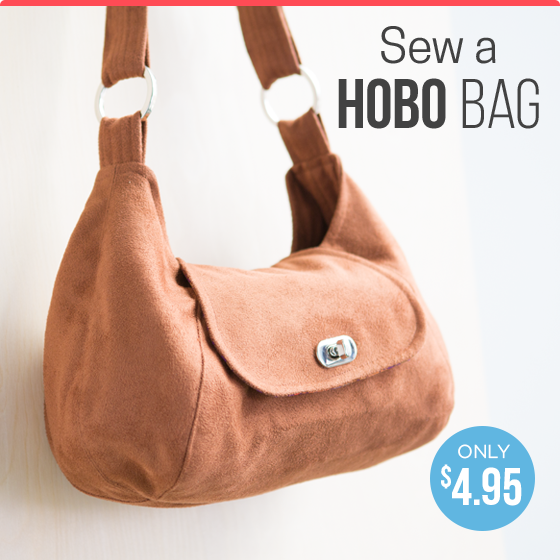 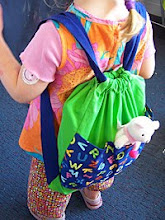 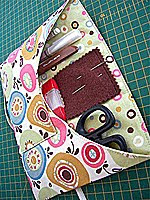